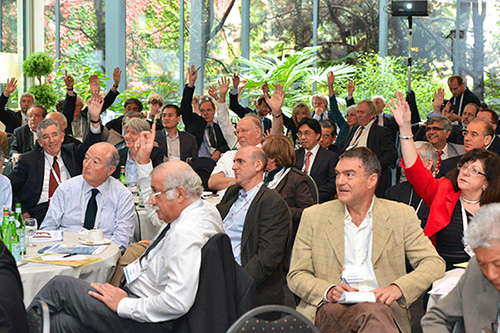 The World Oncology Forum is a series of policy forums, convened by ESO in collaboration with The Lancet, where internationally renowned cancer clinicians, researchers, advocates, policy makers and representatives from industry discuss and define what needs to be done to end avoidable suffering and death from cancer.
It is funded exclusively from independent, non-commercial sources, principally from the ESO’s sustaining foundations, with additional support from the Swiss Cancer League and Swiss Cancer Research, and the city of Lugano and canton of Ticino.

WOF 1: Are we winning the war on cancer?
The launch event was held in Lugano, Switzerland in October 2012, under the title Are we winning the war on cancer?
It resulted in the Stop Cancer Now! appeal - a 10 point action plan for governments to deliver on commitments they made at the World Health Assembly in May 2012 to cut preventable deaths from non-communicable diseases by 25% by 2025.
The Stop Cancer Now! appeal covered the policy headings: Prevent preventable cancers, Treat treatable cancers, Support all those living with cancer, Accelerate finding cures for cancers that are not yet curable, and Strengthen policy frameworks and health systems. It was published on World Cancer Day, February 4th 2013, in The Lancet and in leading newspapers across the world.

WOF2: Treat the treatable
The second World Oncology Forum was held in Lugano in October 2014. It issued two appeals, which called on governments, policy makers and international agencies to work together to carry out a detailed package of actions to expand global access to early detection treatment and care and address problems in the ecosystem for discovering, developing and evaluating new therapies that are hindering faster progress towards cures for cancer.

These appeals were promoted at the World Economic Forum in Davos, 21-24 January 2015, where responding to the rising tide of cancer will be on the agenda for the first time.

WOF3 Prevent the preventable
WOF 3, focused focus on policies for prevention, was held in Milan, Italy in 2015.

WOF4: Cancer and Global Health
WOF 4, focused on Research and Policy, was held in Lugano, Switzerland in 2017.

The next edition will be held in Ascona (Monte Verità), Switzerland. The tentative date will be March 2022.

WOF is organised in conjunction with Cancer World, which explores the world of European cancer care from the perspective of the clinician, the researcher, the administrator and the patient. The magazine gives a voice to health professionals in all fields and at all levels, and offers a platform to those who are most affected by cancer - the people with the disease.

The Lancet is the exclusive scientific media partner for WOF. This is a valuable partnership since The Lancet is by far the most authoritative scientific journal in its field printed in Europe. In 2012 The Lancet published editorials and commentaries about WOF on various occasions. In its 9 February 2013 issue it published the Stop Cancer Now! appeal, with an accompanying comment by Franco Cavalli: An appeal to world leaders: stop cancer now!
It also published three WOF keynote lectures as complete papers. Global cancer patterns: causes and prevention by Paolo Vineis, Christopher Wild, Rethinking the war on cancer by Douglas Hanahan and Cancer survival: global surveillance will stimulate health policy and improve equity by Michel P. Coleman, all publicly accessible.